Thank you for purchasing or upgrading to Voodoo Security 3.1.

VS 3.1 expands on the stability and reliability of the previous version, by including new useful security features, integrating more deeply into our web systems, and extends new threat analysis, so we can protect you from attacks that haven't even been invented yet.

When you rez the Voodoo Security device from your inventory, you'll need to configure it to your requirements.

Right click the device, and select "Edit" from the menu. 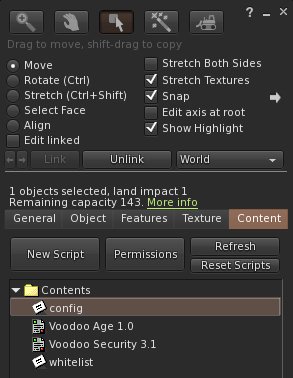 The config notecard contains all the settings for your security device detailed below.

The whitelist notecard contains a list of avatar keys for friends, who should never be ejected from your land.

If your land is owned by a group, you must "deed" the VS3 to the same group.

On the General tab in edit, select the land group, tick Share, click the Deed button, and Deed again on the pop-up dialog, as below. 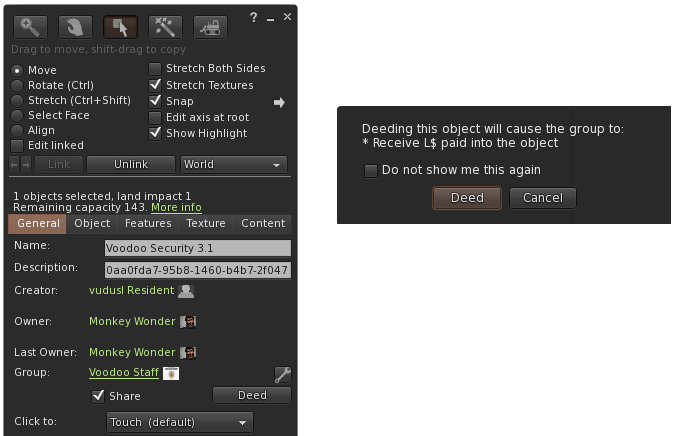 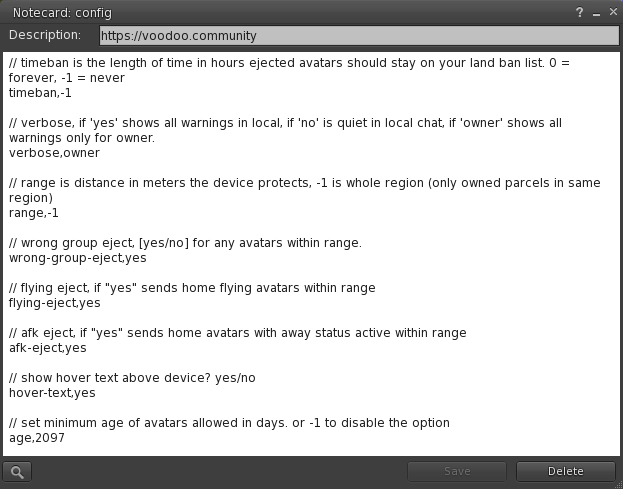 All the configuration is made up of settings, each one has a name and a value, and is seperated by a comma.

The lines beginning with // are just help tips, and can be safely removed if required.

The value must be a number, possible values are:

Positive number - Add known attackers to the land ban list for the specified number of hours.

The maximum number of hours an avatar can be banned (if not permanently) is 144 hours (6 days), according to the LSL Wiki.

This specifies how you would like to be notified when an avatar is ejected by your security device.

yes - The security device will announce in local chat when an avatar is ejected.

no - The security device will remain silent.

owner - The security device will send a private message to the owner when an avatar is ejected.

This optionally specifies the radius your security device protects, and is useful if you want to limit coverage.

Positive number - The distance in meters to protect.

This specifies if you would like to eject avatars with a different active group than the security device.

yes - Avatars with a different active group will be ejected.

no - Active group is not taken into consideration.

This specifies if you would like to eject avatars who are flying.

yes - Avatars who are flying will be ejected.

no - Flying avatars are not taken into consideration.

This specifies if you would like to eject avatars who are in "Away" status.

yes - Avatars who are AFK will be ejected.

no - AFK avatars are not taken into consideration.

This specifies if you would like your security device to display hover text about it's status.

yes - The status of the VS will be shown in green or red above the device.

no - No hover text will be shown.

This specifies if you would like to optionally eject avatars below a certain age, and can be used if an attacker makes new avatars after they've been banned.

-1 - Allow avatars of any age on protected land.

Number above zero - Avatars below this age in days will be ejected.

Can I see peoples IP address and their alt avatars?
A: No, Voodoo doesn't disclose any information other than informing in local chat when an avatar is ejected.

How many devices do I need to protect an entire region?
A: The device covers a region, but the parcel owner must be the same as the device owner.